I was fortunate to be able view Fujiwara’s installation Letters from Mexico (2010–11) when it debuted in Mexico City in January 2011. The discursive installation toys with notions of cultural play and artistic research by muddling earnest observation and satirical self-parody to present a commentary on contemporary Mexico. Controversial for some, as I was often reminded during my stay in Mexico, it is one thing for Mexicans to joke about their country’s predicament, but quite another for a foreigner that may come and go as they please, and not have to live with the consequences!

Letters... consists of a series dispatches from the artist addressed to ‘Europe’ made in collaboration with typists at the Plaza Santa Domingo in Mexico City, and was inspired by writings of conquistador Hernán Cortés, whose letters to the King Charles I of Castile (Spain) described the ‘discovery of Mexico’ in the 16th century.

Dictated in English by Fujiwara, they appear typed as a barely recognisable ‘Spanglish’, transcribed according to each typists’ phonetic interpretation of Fujiwara’s speech. Each letter is co-signed by Fujiwara and the typist as collaborators and co-authors. In order to understand the text, one is required to read the text out aloud. Fujiwara’s words modified by the typists’ translations are re-articulated by audiences and comprehended in their minds as the author’s voice, initiating a chain of processes that broach interpretation, commerce, and persuasion to produce a strange, and for some uncomfortable, intmacy.


When I experienced the work, a line of gallery patrons stood side by side muttering to themselves before a row of glass panels that contained the typed slips of paper assembled together with an assortment of trinkets and souvenier objects, such as a matchbook, a coin, a deer foot lucky charm as well as photographs, embellishing the anecdotes recalled in each missive back to Europe. Around the roof top space objects half packed in cardboard boxes for repatriation back to Europe, such as a Conquistador's head with an Aztec axe wound, turned tables on antagonistic postcolonial discourses. Fujiwara also re-appropriates historical documents and books taking ownership of these objects; perhaps performing another kind of historical theft? A curtain in the tri-colour of the Mexican flag enveloped the mis-en-scene. 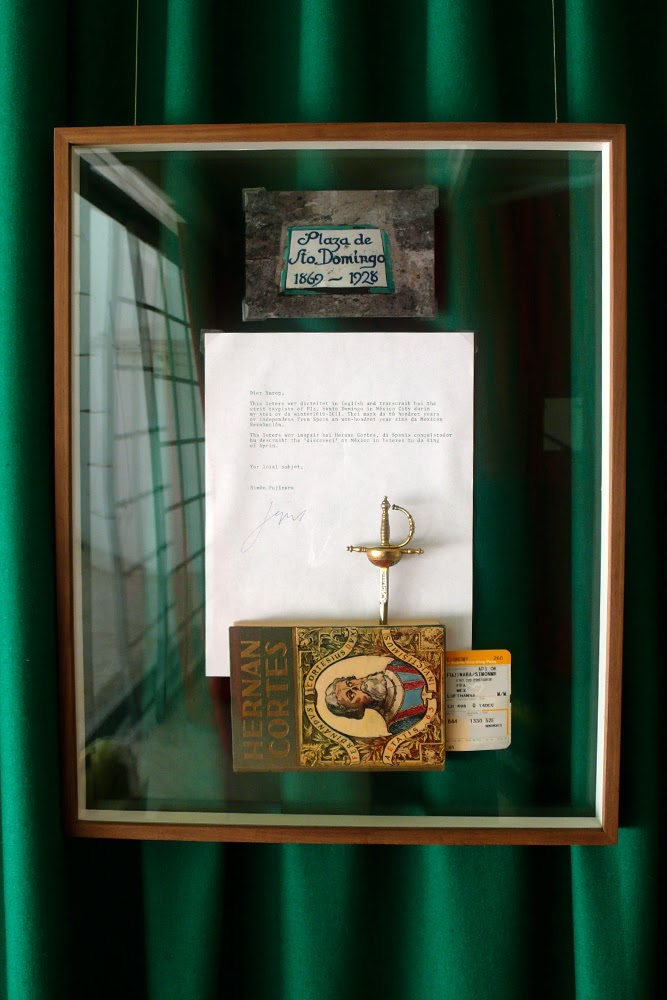 With a feigned niavity Fujiwara exhibits a patronising performance of his European self, but that could also seem to mock Mexican culture:

I read it as a self-parody of the artist’s own position of privilege, and invariably that of the audience (Fujiwara’s gallery, Proyectos Monclova, is located in one of the most exclusive neighbourhoods in Mexico City), in which the artist emphasises the colonial legacies that underpin class inequalities in one of the most vibrant and notorious cities in Latin (North) America. In another letter he asks, ‘Da contry is at wor, dir yorob, is violens ol u left hir?’

Produced as 2010 came to a close, a year that marked two hundred years since Independence as well as centenary of the ‘bloodi’ Mexican Revolution (celebrated as key dates in a nationalistic narrative), but also a year that saw escalating drug-related criminal violence, Letters... appeared as an elaborate prose and prank, but at whose expense?

A pivotal episode in the sequence has the artist recounting a dream delirium where thousands of Mexicans of all classes, ethnicities and genders come together at the Plaza Santa Domingo to participate in a mass orgy—Mexico’s sexual revolution, Fujiwara quips. When the the artist removes his clothes to participate, he discovers he is sexless, with only soft, smooth skin between his legs. Hysterically, he calls for help in English, revealing his European identity. It would seem quite likely that Fujiwara must have appeared as Mexican to some and it is worth considering the artist’s mixed-race make-up. A heritage that seems enviable as a cosmopolitan European, but in the contexts of Mexico’s mestizo culture and its history of racial classification, recalls a legacy of the colonial occupations and arrangements of power that Fujiwara might inadvertantly be replaying. Recollecting his dream, Fujiwara describes the fornicating crowd turning on him, severing his head with a guillotine and sending it back to Europe in a box, adding in parenthesis, ‘Eben in yor drims, u cant olwieis ged wodchu won’.

The last of the letters appears typed by the artist himself in perfect English as an apology to his host country. Upon discovering Fujiwara is a fluent Spanish speaker the typists refuse to work, even for double the amount of money. He offers the following short verse:

There is something about these aphorisms that left me doubting the sincerity of Fujiwara’s apology. Perhaps it was the duplicitious and the uneven nature of the collaboration, more so than the feigned patronising of tone of the letters’ author. Despite the delight I derived from this work, Mexican friends and peers were offended, suggesting to me that the flawed process of translation that Letters... relied on, fictional or otherwise, worked on assumptions made about Mexicans by Europeans that were not only fundamentally disrespectful, but that still persisted. However, it is also this problem of translation across unequal teirs of class, citizenship and ultimately social and geographic mobility that I think is what makes Letters... so compelling.

‘Dear Mexico, forgive me but I am only European.’ 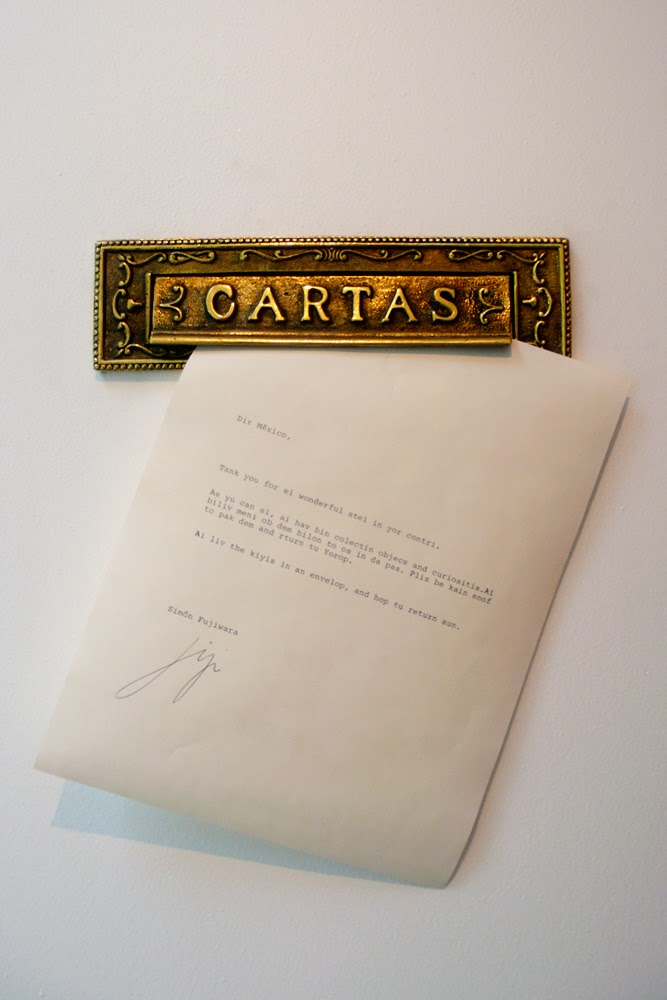