They died on their own from the beating, guey. They just died. They just died and shit, guey. You should have been there. You would have seen Poncho, dude. He was crying like a faggot —

‘What friend, you son of a bitch, shut your mouth!’

In a telephone conversation teenage sicario (hitman), Gabriel Cardona, describes to his childhood friend and accomplice Rosalio Reta how he finished off two rival teenagers he had kidnapped. After torturing and killing them with a broken bottle he disposed of their bodies in a 55 gallon drum of diesel and set it alight, making a guisado (stew) of their remains.

Cardona and Reta grew up poor and troubled in border city of Laredo, Texas. By their early teens they had drifted out of school and lured by the promise of fast cash, faster cars and racy chicas, the childhood friends fell in with the notorious Mexican drug gang, Los Zetas.

The two were schooled in arms, combat and logistics by the criminal organization founded by what many believe are US trained former mercenaries. Graduating as prized Zetillas (baby Zetas), the two American teens would kill on command across both sides of the border. They lived in safe houses and were kept on retainers, earning as much as USD 10 000 and two kilograms of cocaine per hit, plus perks such as a USD 70 000 Mercedes car for a job well done.

The telephone conversation above was intercepted during a police operation lead by Laredo detective Roberto Garcia in April 2006 that resulted in Cardona’s arrest, then aged nineteen. Cardona admitted to his role in seven murders and implicated Reta amongst others. Reta went on the run to Mexico.

A month later, Reta was arrested in Mexico in conjunction with a botched hit at a Monterrey nightclub. He allegedly killed four and injured twenty–five after opening fire and lobbing a grenade into a crowded bar. Still, he missed the target and Los Zetas wanted him dead. Reta contacted Roberto Garcia from jail and pleaded to be extradited to the US. There, in a taped interview the seventeen year old admitted to a staggering 30 murders.

Gabriel Cardona is currently serving eighty years for five murders, after which — if he’s still alive — he will serve a life sentence for the kidnappings. Whilst awaiting trial Cardona had an inmate tattoo two wide open eyes on his closed eyelids. In 2008 Reta was sentenced 70 years for two murders in Laredo. He also had a prisoner tattoo his face, with the marks of a jester.

Now removed from the streets they re–surface in the popular imagination — their adolescent lives an upturned coming of age narrative — rags to riches, in a few short years. Fast times, high on narcotics, pumped with adrenalin and teenage hormones, came to a spectacular halt followed by an ongoing, real time extended epilogue of a lifetime behind bars.

‘You know, it’s the money, cars, houses, girls,’ he said, pausing, ‘and you know that ain’t going to last a lifetime, that it’s going to end.’[2]
— Rosalio Reta

Let’s go beyond the moral outrage and consider how these young and shameless gen–y killers operate as cultural agents, representative of (and possibly heroes to) a brazen generation of extreme necronauts [3].

Growing up along a crucial corridor for the lucrative drug and organized crime industries Cardona and Reta were exposed to some of the most flamboyant narco violence and mythos.

Like many working within the Latin American drug trade Reta and Cordona worship the cult of Santisima Muerte, and both sport large tattoos of this female deity of death.

That there is no beauty without death, its immanence. We shall sing death's beauty — that is, beauty.[5]
— International Necronautical Society

Tepito is a notorious barrio in downtown Mexico City known for its large market selling shoes, clothes, electricals, as well as pirated and counterfeit goods. It is also the centre of a more illicit trade in cocaine, marijuana and more recently arms. [6]

After World War II Tepito earned a reputation as a neighbourhood of undesirables, because of the poor socio-economic status of its residents and its high density of cheap, poorly made housing. In the post-war down turn the government initiated a rent freeze. Conceived as temporary measure it has never been lifted, despite efforts by governments and landowners, consequently Tepito maintains some of the cheapest rent in Mexico. The ‘bravo barrio’ has been a point of contestation amongst city officials for years, but through the resistance and ingenuity of its residents it has developed a unique culture of its own, that prides itself on its relative autonomy.

Residents of crime-tossed neighborhoods like Mexico City’s Tepito began revering Santa Muerte more than Jesus Christ, experts say. Some of its devotees eventually split from the Catholic church and began vying for control of Catholic buildings, and that's when Mexico's Catholic church declared it a cult. [7]

One reading of La Santisima Muerte is as a willful subversion of Catholic tropes and rituals. The use of marijuana in lieu of incense and the development of a 'rosary' [8] at the shrine in Tepito are methods of evangelising those at society's margins, those who feel let down or poorly served by the Church and other authorities.

Just as the Virgin of Guadalupe is thought to be syncretic of the pre–Hispanic mother goddess Tonantzin, it is suggested that La Santisima Muerte is affiliated with the Aztec ‘Queen of the Underworld’,  Mictecacihuatl. When considered in relation the Virgin of Guadalupe — the one who sustains life — La Santisima Muerte is then the one who takes it away.

I visited the shrine in Tepito in March 2011. Enriqueta Romero Romero, known as Queta, who established and maintains the shrine located at the front of her house, changes the deity’s dress on the first Monday of the month.

Thousands of pilgrims flock from all over Mexico city and beyond, to bring offerings and seek blessings, often with their own personalised statues of La Santa. Some crawl on their knees from the subway. The faithful bless each others statues with Tequila, disperse apples and palletas, and smoke marijuana in her honour. Despite its fearsome reputation, the gathering was much like any other community festival — marked by good will and a sense of pride. La Santa was dressed in red. 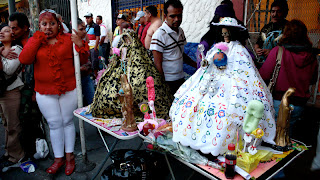 [Margolles] interrupts the art space by bringing in these materials that are really charged, which traces the relationship between death and power. It's about necropolitics, and the eruption of necropolitics in the art sphere.9 Mexican artist Teresa Margolles employs the tactics of infection. Working as morgue technician she began using materials from her tasks at work — run off water, blood, body fat — and redeployed them in the service of her art. [9]
— Mariana Botey assistant to Cuauhtémoc Medina, curator of the Mexico Pavillion, Venice Biennale 2009. 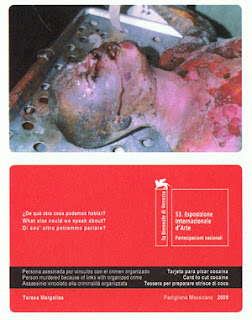 I would give addicts these cards, and when they turned them around they would see the image of this dead body. This shows that the consumer is also part of this circle. You don't feel responsible of (for) this death, but you are part of this chain of death. [10]
— Teresa Margolles

With 21 Score Settlings (2008) Margolles set pieces of glass collected from narco pay back crime scenes into 21 pieces of jewelry — rings, bracelets, bangles, pendants, earrings — made at Joyería Anne in the Rafael Buelna market in downtown Culiacán. This market is affiliated with drug trafficking and the small businesses are believed to aid in the laundering of narco dollars. 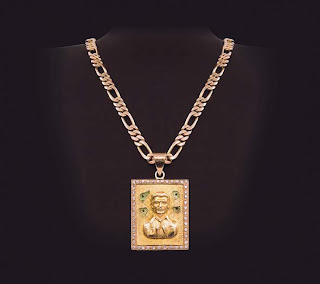 Evoking the ‘Narco saint’, Jesus Malverdé when displayed at prestigious galleries and art fairs — and more significantly when sold — these works ‘infect’ the art market with the drug economy, again implying the narco dollars operating within the Art World.

Mexico’s policy is consistent: It makes every effort to appear to be stopping the drug trade so that it will not be accused of supporting it. The government does not object to disrupting one or more of the smuggling groups, so long as the aggregate inflow of cash does not materially decline. [11]
— George Friedman, STRATFOR Global Intelligence

It is here that the sovereign power must intervene, not necessarily to kill those who refuse to die but to ensure, through the use of force, that they will be exposed to death and compelled to accept the rationing of life by the market. [12]
— Warren Montag

If the drug trade is so significant economically, then the right to kill exercised by the narcos like Las Zetas, is ultimately accepted as part of that set of relations. As the ongoing killings in Mexico suggest, the conditions by which this ‘rationing of life’[13] occurs is beyond the control of much of the population. It is well known that criminal organizations sponsor politicians and have law enforcers on their payroll, often given the choice between plata o plomo — gold or lead. With this culture and depth of corruption it is difficult to distinguish between state powers and organized crime. Perhaps, to follow artist Teresa Margolles analogy, the situation is like an ‘infection’ of civic life. A post–democratic economy infected by death — where death proscribes the rituals and processes of daily life. 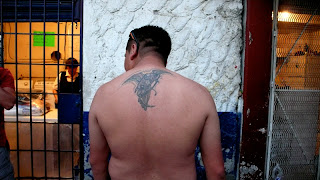